Reasons to travel include to visit people who live somewh 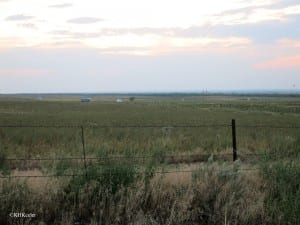 ere else. So I set out from near Denver to see old friends in Lincoln, Nebraska. The trip, crossing eastern Colorado and Nebraska, is almost exactly 500 miles, downhill and into a region of higher rainfall.

The result of the rainfall gradient is a plant gradient. It is not as easy to see today as it was before crops replaced native vegetation, but you can see some of the consequences. Look for these next time you make this trip.

It is a principle of plant biology that bigger plants need more water. In eastern Colorado, unplanted areas have 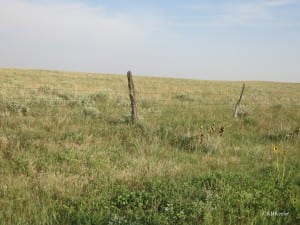 plants reaching at best knee-high (2-3′, less than 1 m). In 2013 June and July rainfall in eastern Colorado was above average, so the the plants were taller than usual, especially because flowering stalks often grow above the rest of the plant. The heights of plants on the plains of Colorado were about as tall as they get. Historically it was shortgrass steppe and sand sage prairie. Development and agriculture has replaced most of the shortgrass steppe, but there’s still a lot of sand sage prairie–because agriculture is much more difficult on sand. In the photo you can see the plants don’t reach the bottom strand of wire on a barbed wire fence. 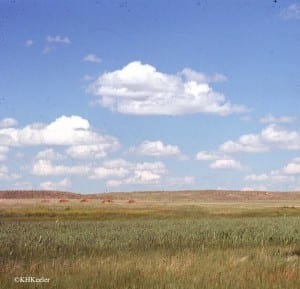 Trees are few. As you drive I-76 eastward, there are many areas of no visible trees.  The 15″ rainfall will not support trees. (And remember that is the average!  A dry year is can be very dry and a tree has to survive those.)  If you see trees, there is extra water, either a water course or watering by people.

A second indicator of the rainfall in eastern Colorado and western Nebraska is that there isn’t enough rain to raise corn. Where you see corn, it is irrigated. Usually it is a center-pivot system, which can deliver water to all parts of the field. Center pivots are circular, making the odd green circles you see flying over the region.

By North Platte, the annual average rainfall is 20 inches (50 cm). Her 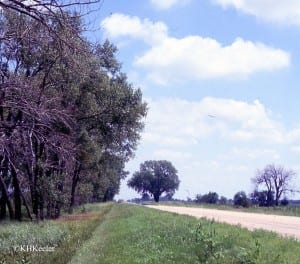 e, the native vegetation was midgrass prairie. Taller plants crowded out the little plants of the shortgrass steppe. It is difficult to see the change along the highway. What I did notice was that there are more trees near the towns of Big Springs, Ogallala, and North Platte than in eastern Colorado. However, unless they were right next to the river, the trees often looked extremely battered, with large sections of dead wood. (In the photo it is summer you can see leafless (dead) branches.) Conditions are better for big plants like trees in western Nebraska than in eastern Colorado, but by no means good. Historically it was so dry that western Nebraska was grassland (prairie) not forest. 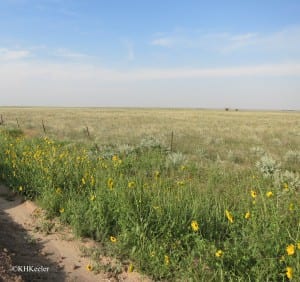 By Kearney the average precipitation  is 25″, and at Grand Island 26″.  At about that point the native vegetation changed again, from midgrass prairie to tallgrass prairie. More rain let tall grasses such as big bluestem (Andropogon gerardii) and Indiangrass (Sorgastrum nutans) overgrow the midgrasses.  Tall grasses were about 4′ tall in a dry year, but reached over 6′ when flowering. In a healthy native prairie the tall grasses fill the area with stems, so walking through them is like swimming as you push grass out of your way. In Nebraska, the prairie is largely gone, replaced by agriculture, especially corn. But corn is a grass. In fact, a tall grass. We have replaced the native tallgrass prairie with a planted tallgrass prairie. Walking thorough a mature cornfield is a lot like walking through a tallgrass prairie. 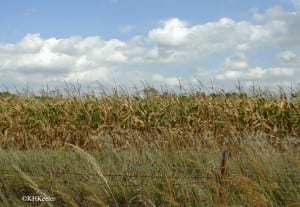 Today, you can see the change in rainfall as the appearance of unirrigated corn fields. From about Lincoln eastward, there’s enough rain in most years to raise a corn crop without irrigation.

You can also see the increased rainfall in the more numerous and healthier trees.

When you get out of the car in Lincoln, the humidity is obvious by Denver standards. That too is an indicator of higher rainfall.

After crossing eastern Colorado and most of Nebraska, I stopped in Lincoln but the gradient continues. Omaha gets 30″ of precipitation on the average, DesMoines 35″ and Chicago 36 inches. The tallgrasses grew taller more often, and trees did better and better. From about Omaha east, there’s enough rainfall to support forests, but historically prairie fires kept the area grassland.

Watch for the changes the next time you cross eastern Colorado and Nebraska.